Histamine and Its Systemic Effects

Histamine and Its Systemic Effects 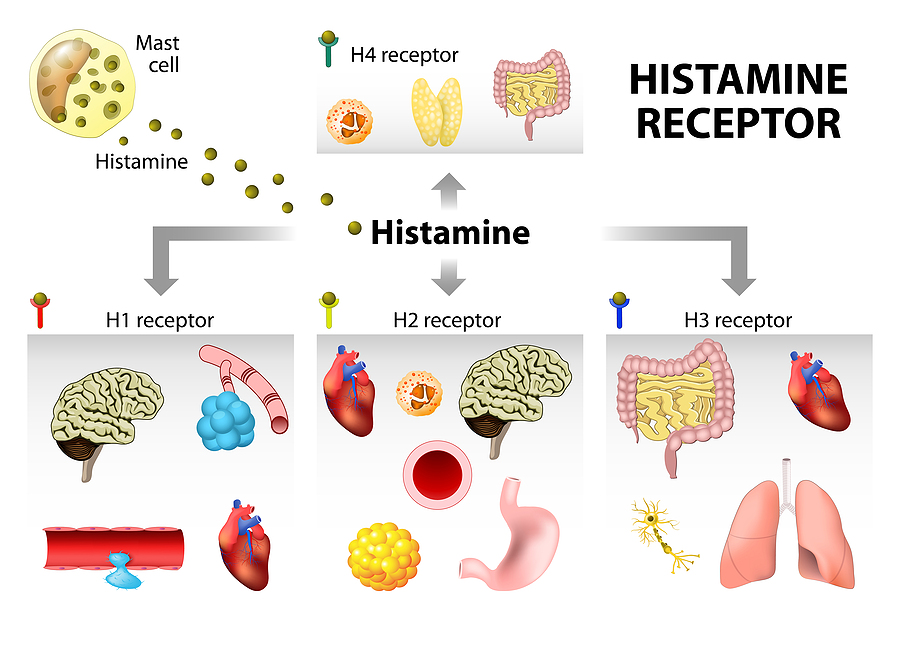 ‍Histamine is a bioactive or “vasoactive” amine produced in the body in response to an injury or foreign substance. It has an array of physiological effects, including increasing blood supply to specific sites in the body. In addition, histamine is involved in the immune response, regulation of gastric acid, permeability of blood vessels, contraction of muscles, and the normal response to inflammation.[1] The highest concentrations of histamine in the body are found in the gastrointestinal tract, lungs, and skin, with lesser amounts in the brain and heart.

Histamine is not only produced in the body but is also present in many fermented foods, such as sauerkraut, sausage, cheese, yogurt, and alcoholic beverages. Tuna, olives, spinach, eggplant, avocados, tomatoes, cherries, and citrus fruits are other histamine-containing foods. Despite their absence of histamine, some foods, such as berries, tea, and a variety of spices, stimulate the endogenous production of the amine due to their benzoate content. In addition, microbial fermentation can convert the histidine in high-protein foods to histamine so that the histamine content of food can increase over time.[1]

Histamine/DAO balance Endogenous and exogenous histamine must be broken down in order to maintain homeostasis and histamine balance. The enzyme diamine oxidase (DAO) degrades histamine by converting it from2-(4-imidazolyl)-ethylamine to the inactive metabolite imidazole acetaldehyde.[2] The active ingredient in HistDAO is porcine-derived diamine oxidase, and research suggests that DAO derived from porcine kidney appears to have identical action to DAO derived from porcine intestine.[3] In humans and other mammals, DAO is found in high concentrations in the gastrointestinal mucosa. Animal studies suggest that circulating DAO may be a marker for mucosal integrity and maturity.[4] Certain drugs may affect histamine balance in the body by promoting histamine release or inhibiting DAO.[2]

Histamine Tolerance may not be the same for everyone. Results of a double-blind, placebo-controlled crossover study suggest that tolerance to histamine can vary from individual to individual.[5] Total body histamine load must be considered when evaluating histamine tolerance, and a balance between histamine and DAO appears to be crucial to maintaining skin, rhino conjunctival, and gastrointestinal health. [2,6]

Genetic and environmental factors may interact to influence DAO expression. Ongoing research addresses the role that genetic variations may play in individual differences in DAO metabolism, and serum activity was significantly associated with seven single nucleotide variations within the DAO gene. [7,8]

Histamine tolerance may be reflected in detailed questionnaires, food intake logs, trial with low-histamine diet, and measurement of DAO and histamine. [9,10] Histamine tolerance and its manifestation may vary from organ to organ as well. A study of 39 patients suggested that intake of DAO produced a statistically significant reduction in symptoms associated with exogenous histamine ingestion, although single symptoms were not found to be reproducible.[11] Ultimately, diminished serum DAO levels appear to be associated with changes in histamine degradation and serum histamine levels.[10]

Although the mechanism of histamine degradation is uniform throughout the body, HistDAO only addresses excess exogenous histamine found in the folds, villi, and microvilli of the small intestine. HistDAO is not absorbed and therefore does not have systemic activity. A two-capsule dose of HistDAO contains 20 mg of vitamin C, 200 mg of calcium, and 20,000 HDU (histamine degrading units). HistDAO is NOT EFFECTIVE for symptoms of immune-related food allergies, such as peanuts, shellfish, etc.

Suggested use: Take 1 - 2 caps no more than 15 minutes before the consumption of histamine-rich foods or take as directed by your healthcare practitioner.

Mast Cell Activation Syndrome (MCAS)
Mast Cell Activation Syndrome (MCAS)
MCAS and Quercetin
Histamine and Its Systemic Effects
Food Allergy vs. Food Intolerance
Dr. Hubbard works as a functional medicine consultant in conjunction with your current health care team and is not considered a replacement for your primary care physician. She requires all new patients to have a primary care physician to cover emergencies and routine care and screening.

GRADUATE OF THE INSTITUTE
FOR FUNCTIONAL MEDICINE'S CERTIFICATION PROGRAM
“The food you eat can be either the safest and most powerful form of medicine or the slowest form of poison.”
ANN WIGMORE